Primarily, readers of this blog may be concerned as to what is going to emerge from  my 4th welsh jury trial, next week , from the original subject of a ‘medical examination’ by a police psychiatrist in order to obtain their problem’s  incarceration, indefinitely.

Secondly, are those medical records generated, originating from the HM Prosecutor’s attempt to have their victim locked-up with a Mr Brady in Ashworth High Security Psychiatric hospital, available as defence evidence for the current jury?

DESPITE the following proof, below, already in HM Prosecutor’s possession, these conflicting medical reports to censored, were deliberately withheld from the secret 2nd Dec 2009 court hearing while I remained locked up below:

Remember, the first jury to ask for them was lied to by the Cardiff judge and his HM prosecutor who had first fabricated a ‘harassment’ conviction to allow, on the face of it, a reasonable restraining order on 1st December 2011.

The apparent problem , next week, is that the chosen prosecutor not only took the trouble to cross the Severn Bridge in 2013, to examine the now unlawfully re written Cardiff clerk of the court’s contemporaneous records, he has also seen the clumsily corrected magistrates court log with no exhibits in existence any more for the RCJ and ECHR!

Her Ladyship has already refused me him as a defence witness, in lieu of those sensitive HM records, as the cabal continues, of course, to refuse successive juries a copy of said relevant records for fear, without doubt, that the wrong people will be goaled.

With the defendant entitled to ‘disclosure’ of his own medical records, to guarrenttee his freedom and with HM partnership and police hell-bent on covering up their joint concocted medical evidence I think this is my 13th Cardiff judge refusing a fair trial by also denying me the censored, the stage is set for a farce that may even purpass the 2010 machine gun trial when they complained on many things including the ‘police plant’ amongst them.

So I thought to simplify to the unititiated:

First, a sample of the medical records witheld from successive juries.

My small contribution in getting my daughter Belinda’s hugely successful ‘Base Camp’ of http://www.Explorers Connect.com near Chatsworth House caused me to bump into an old climbing friend of Snowdon and the ‘sweats’ up the dreaded three cliffs of Llanberis Pass!

The doctor’s private letter to the then, His Honour Judge Nicholas Cooke QC, was read out deliberately in open court, despite my protests, in an attempt to perswade tearfull Belinda sitting in the auditorium, with many others, worried as I faced a mandatory 10 prison sentance for ‘trading in machine-guns’ by the police having re-painted her to try and fool a jury.

SO, why was this Dr letter not given to me and, instead, unlawfully redacted from THE 1st October 2009 transcript if they are not just a bunch of spineless deceitful bastards? 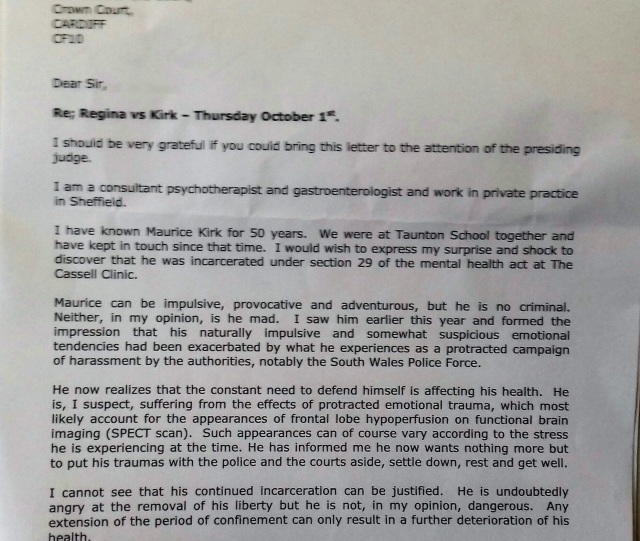 This transcript with so much more as to what was ACTUALLY said in a ‘UK court of record’ does not appear on the official transcript….another habit of theirs, I have noticed whilst existing in that -part of the Principality.

Like wise, what this case next week is really about is briefly summarised, if not distorted, in this civil damages that claim judgment, by HHJ Seys Lewellyn QC by his anticipated refusing even my right to appeal to RCJ’s  Court of Appeal.

Also, following the eventual 24 year police delay in allowing a correct transcript to be released, further exposing the lying little bastards, I mean my 1993 ‘garrotte’ type instrument used on HRH Prince Charles farm and their attempt to extradite me to guernsy,, their is now the release of yet another deliberately corrupted HM Crown Court transcript of Cooke’s 1st October 2009 performance, for want of a better word.

The transcript of the then Recorder of Cardiff, Judge Nicholas Cooke QC, not only identifies his blackmail of me to use his own court defence barrister, to feed the CPS with privilaged info but it identifies why censored cleverly, apparently, refers to Norman Scarth Esq for his  reason for my needing to be sectioned MAPPA level 3 category 3 in a mental asylum for the rest of my life. 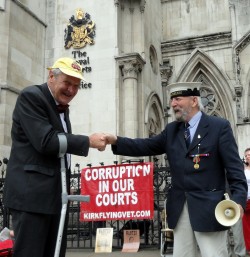 The transcript remarkably reveals that Norman, a leading expert in the art of ‘breaking’ of troublesome horses and veteran of the WW2 arctic convoys, is now made out to be so dangerous by his simply writing to Caswell clinic that I must not even receive outside post for fear it may adverselly affect me……as said many times before, could Enid blyton done better than the doctor’s 30th september and October  2009 reports for HHHJ Cooke and current Recorder, Her Honour Judge Eleri Rees?

As well, in his reasons, nothing to do with me being a danger to the community but a serious danger to his employer and and the likes of Norman appearing to have put the ‘ fear of God in the swine’

A side ways bit of fun is,  of course, cooke promised me transcripts free as from June 2009 and again repeated in this 1at Oct 09 transcript but successive judges, in cluding the current Recorder have renaged on the promise of a previous recorder…