During my 2014 HMP Swansea imprisonment, by describing me as ‘too dangerous’, South Wales Police twice prevented the prison from escorting me to my respective Cardiff hospitals for my pre-arranged internal examinations requiring general anaesthesia.

On an earlier occasion NHS (Wales) doctors at a Cardiff even refused to carry out the internal examination having accepted that the 2nd December 2009 court evidence was true.

This was provided from Dr Tegwn Williams, Professor Rodger Wood and HM Prosecutor, now His Honour Judge Richard Thomlow that my significant brain damage was likely to be from a brain tumour .

All this fabricated medical evidence was given in secret, of course, to His Honour Judge Neil Bidder QC on 2nd December 2009 leaving the then late proposed G/A procedure, in 2013, far too risky to be carried out.

To this day the Welsh authorities have failed to disclose that court evidence to me or even suggest or arrange ‘follow up’ examinations.

In early 2010, on acquittal from the police fabricated ‘machine-gun’ indictments, the Cardiff Crown court judge, now Mr Justice Nicholas Cooke QC, even promised me I would get that ‘relevant medical disclosure’. He was lying yet again, of course, which lead to the inevitable by my calling him a blatant liar almost to his face with the obvious  consequences of gaol if I continued to speak the truth 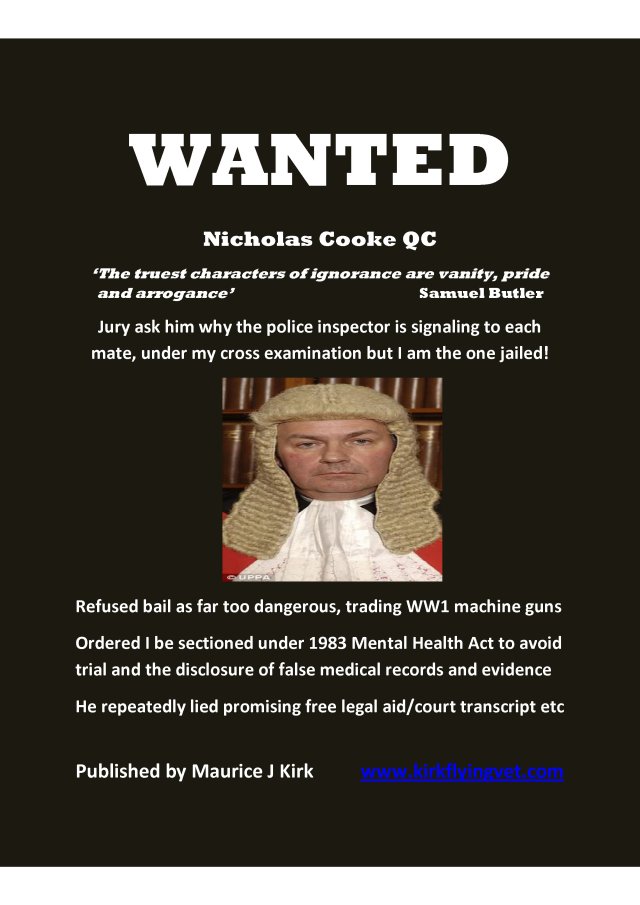 This deliberate delay has left me with extensive carcinogenic lesions diagnosed by internal examination from physicians in both France and the Channel Islands. Both physicians prescribed appropriate daily medication now doubled in quantity and considered needed for life.

Meantime there appears to be skulduggery in the making between all three defendants, HM Ministry of Justice, HM Parole Board and South Wales Police, over their joint excuse for my non release for another eight months due to no forensic psychiatrist ‘could be found’ as ‘available to sit on the board’ for my release because the Cardiff cabal is once again smack of the middle of their own stench that now emanates from Cardiff.

The defence argument appears to be that a judicial review is all that I am eligible for so following the derisory attitude for almost all  my previous sixty odd previous judicial reviews at the RCJ, all caused by the South Wales Police, I see little point in going down that well worn route!

All three defendants are clearly ‘shit scared’ that there may come a day, like in their  machine substantive hearing of evidence, ‘planned by the taffia for between 2025 to 2035, when the evil little bastards may have to face cross examination that will, rest assured, expose this inherent welshing deceit identified so often.

16 09 07 amended parole Board Particulars of Claim

AND WHERE, PREY, ARE THE WITNESS STATEMENTS OF THOSE IN SWANSEA PRISON & JUSTICE  MINISTRY?

Swansea prison staff repeatedly apologised for the fact no welsh doctor was prepared to sit on any of their monthly parole board hearings, over eight months and  go against censored by simple contradiction what remains written in my medical records with thirteen, no less, spineless Cardiff judges, so far, complicit attempting to cover up these  malicious acts of thorough deceit.

Once again this abuse of process/misfeasance results from successful failed police disclosure originating from their conspiracy to fabricate MAPPA3/3 status to unlawfully affect  their victim civil claims against it.

Achieved by the 2009 blackmailing of censored to write fanciful medical reports, for IPP Ashworth, once they knew I would win their 2010 machine-gun trial.

Only by going outside their evil system did I mange, for my own peace of mind, there was no brain tumour, ‘significant brain damage or ‘delusional paranoia’. 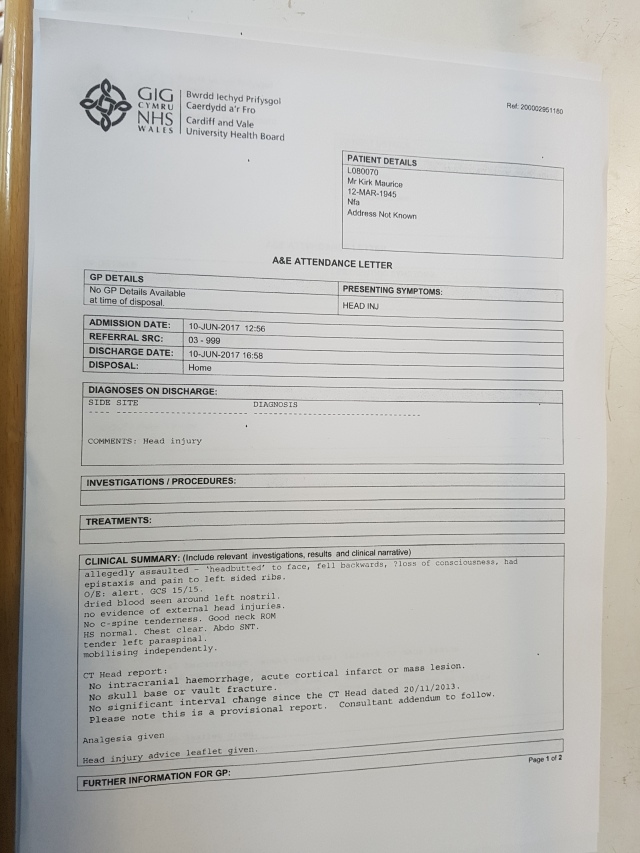