Welsh Judiciary Pulls Another a Flanker

[Mysteriously ‘found’ in a Cardiff police station after 23 years only to be promptly seized by the court, to further delay, when not giving my own property back]. 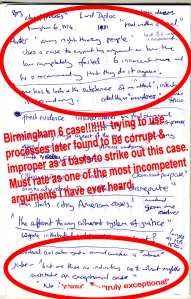 1. I am writing about the above case in which His Honour Judge Seys-Llewellyn QC said he handed down his judgment on 27th October 2015. The learned Judge also then extended time within which to appeal to a further date in, from memory, in January or February 2016.

2. You will also recall that the learned Judge also extended time within in which to file an Appellant’s Notice in the Royal Courts of Justice to 21 days from the date in question.

3. I have tried to file an Appellant’s Notice with the Civil Appeals Office, in this matter, on at least three occasions but have been informed each time by that office that they require a sealed order of the court regarding the matters that I am seeking permission in order I may appeal against it.

4. The Court of Appeal Office has also informed me that without such an order it will not accept the Appellant’s Notice and that I would also need an extension of time if refiling with such an order. 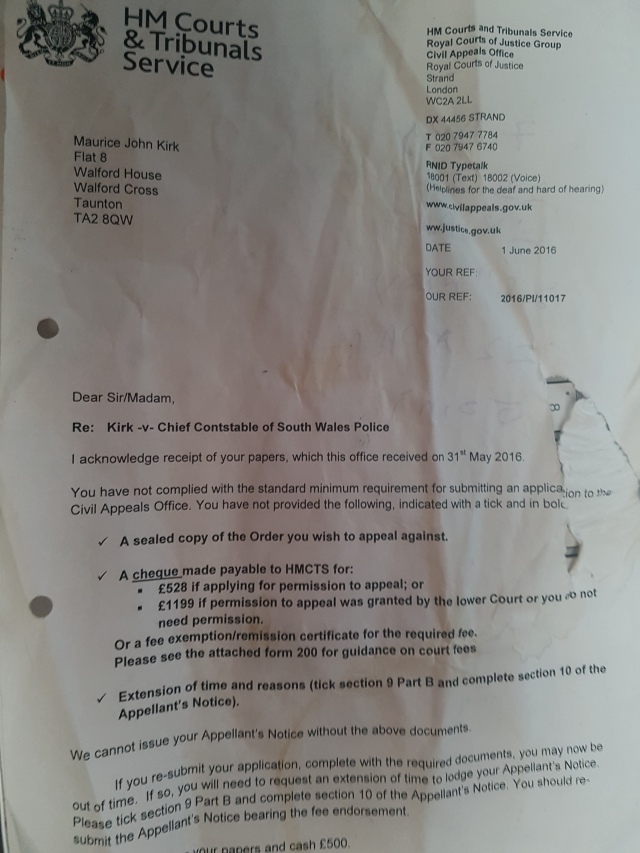 5. It seems that the court either at the handing down of the judgment on 27th October 2015 or after the later hearing, when time for appeal was extended, believed it was sent or was an oversight. Therefore, I request that either the court amends under the slip rule one of its original directions orders or issue a supplementary order setting out which actions were dismissed by the learned judge and which ones were allowed with damages to be assessed etc. Then, again, I may return to the Court of Appeal Office with the appropriate eligibility.

6. I am told that such an order is required by the Civil Appeals Office and is also required for the issue of res judicata and cause of action estoppel. I also understand that the court may indeed hear and receive further argument right up to and until the relevant order has been drawn up and sealed. I, in particular, refer to yet undisclosed police records despite court orders

7. In addition, in the event that such an order is now drawn up, I would also invite the court grant permission to appeal and to further extend time within which to lodge an Appellant’s Notice in the RCJ under CPR Pt. 52.4(2)(a) to 21 days of the issuing of the relevant order accordingly.

8. There is a second serious matter in that no one can find, for me, any evidence of the ‘corrected approved’ 257 page judgment having ever been sent to me by email by the Cardiff court, in late October 2015, as purported.

9. Thirdly and equally serious is that this Claimant also did not receive a copy of the purported returned police ‘corrected’ draft judgment originally sent for parties, in confidence, when gross errors remain in the said document. Your court clerk has no record either I was told.
Yours faithfully
Maurice J Kirk BVSc

2 Responses to Welsh Judiciary Pulls Another a Flanker