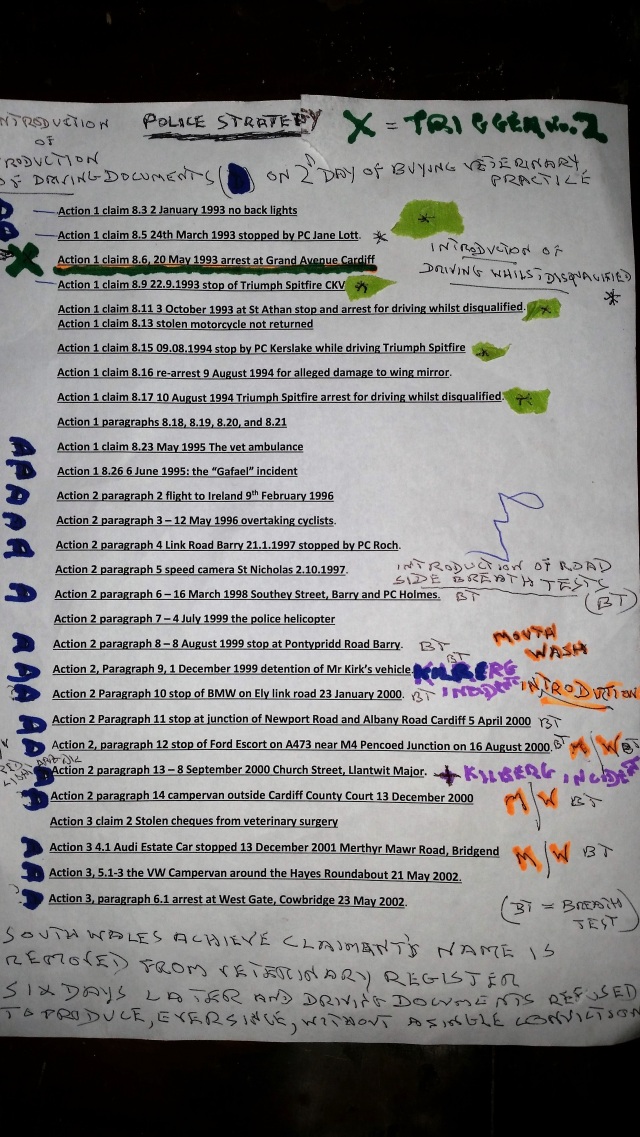 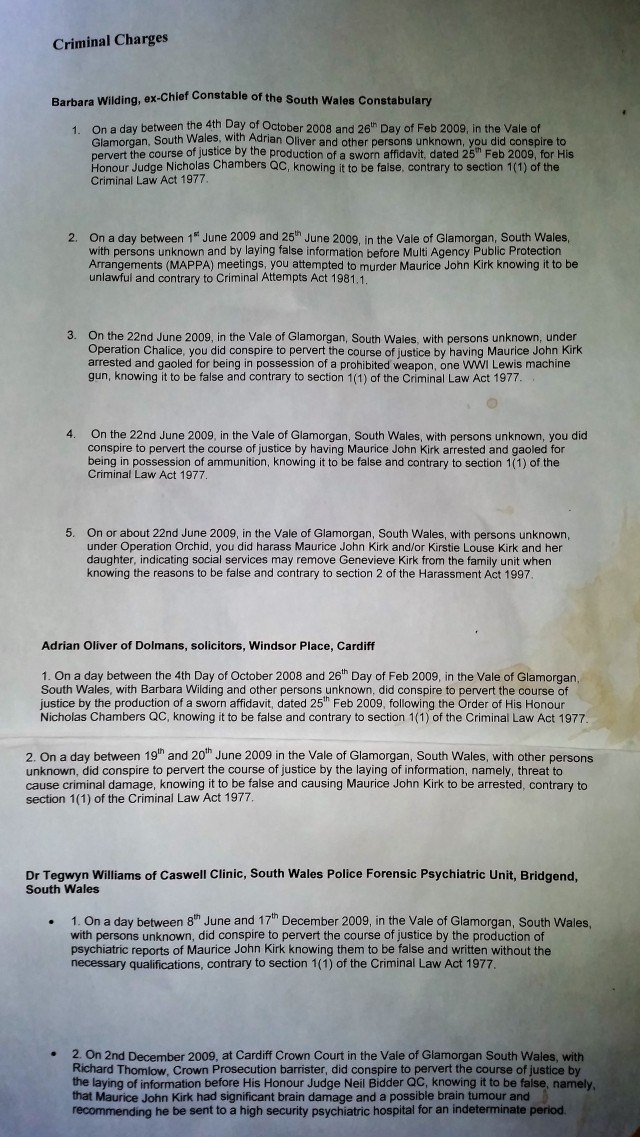 NB Inspector Rice was the Barry custody officer in charge of altering the earlier ‘Breach of the Peace’ arrest records, re Vale of the Glamorgan Show at Barry police station.

The Claimant had been, on the day, the  Honorary Veterinary Surgeon for the show.

All three hurriedly drafted cock-eyed versions, before HM Prosecutor and clerk of the court, were deliberately withheld from the three Justices of the Peace) while keeping Inspector Rice well out of it.

The Claimant’s secretary, for 8 years, Commanding Officer for Wales Royal Air Force Cadets, has typed at least a 100 arch-ever files and disappeared into France, in retirement and recuperation to be unable to be found, in time, to give at least a week of extra evidence in the trial, including what she witnessed in the Barry and Cardiff courts as case after collapsed as if skittle pins had been hit, right on target, by a ‘Zummerzet skittle ball’).

In the collapsed ‘dangerous driving’ allegation (Action 2 claim 12) the Claimant had instructed Diane to even follow police officers (eg WPC Rewbridge) into the public lavatories of Cardiff Crown Court to ensure no more conspiring occurred for the next waiting witness after the previous witness had given evidence and was released.

His Honour Judge Nicholas Cooke QC, who had the Claimant’s daughter in tears, whilst reminding her, sitting in the public gallery, of the 15 year mandatory prison term he father was facing if he did not now divulge his defences, over the ‘machine -gun’ conspiracy,to a pro-bono defence barrister mysteriously suddenly available.

The same judge had stopped this August 2000 ‘dangerous driving’ trial as the jury had just caught a Barry police inspector (name forgotten’ but in transcript), sitting in the well of the court,signalling to respective prosecuting police officers as they were being cross examined, Their jury note, just as in the 4th May 2012 first of three ‘breach of a restraining order’ trials, had been purloined from the court’s cellars, many years later and can be viewed on the downloads of his dedicated to SWP bullying, http://www.kirkflyingvet.com.

What does one do when the conspiracy includes a few right in the heart of the Welsh judiciary seeking autonomy. 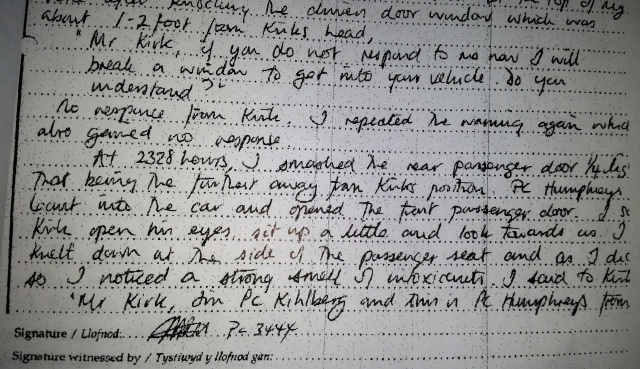 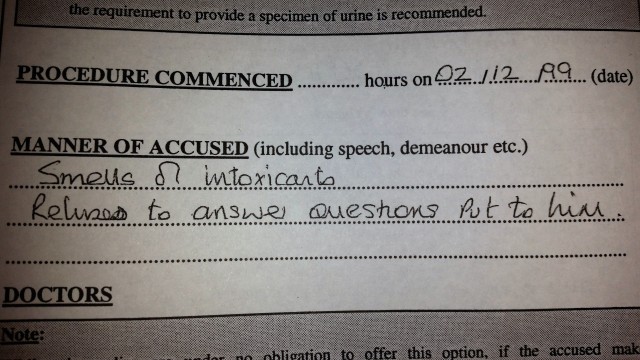 16 02 18 Inspectors Steve Parry Twigg The two police officers ignoring witness summonsesas the first made up the idea of ‘all vets smell of intoxicants’ and the latter was the officer no one could find to ‘identify’ so he was sent to prison until he was.

Veterinary cars do not generally ‘smell of intoxicants’ and cannot not be mistaken with routine antiseptic/disinfectants used unless the police officer has some other agenda.

Judge: Just help me if you would Mr Roe. On the last occasion when you were giving evidence, of course I have the Witness Statement that you made for the purposes of these proceedings, and amongst other things you said “I advised Mr Gafael and Miss Jenner not to attempt to re-enter the premises” and in your Witness Statement, “I categorically deny that I was involved or had knowledge of any police officer gaining access to the flat”.  You were specifically asked about Mr Gafael’s statement where he said “later that afternoon following a conversation with Sergeant Roe, he and myself gained entry to the flat and I replaced (?) etc.” and you told me “I went with Mr Gafael and his girlfriend. There was a roller shutter door. We couldn’t get in as I recall. I can say for certain I would not have gained entry. I recollect going to the flat, the roller shutter door was down. I can only recollect going on the one occasion” which is where you were being specifically asked “Well, Mr Gafael says later that afternoon you went back with him, and into the flat” and of course having looked at your statement of the time, you’ve told me that, Yes you did.

Roe: Yes, I agree Sir, that I couldn’t recollect it at the time, that I’d gone back there, but after this period of time, times have merged somewhat and uh …. I didn’t recollect it at the time going back, but I have to agree that I must have returned there. I said it in my Statement and if I’ve said it in my Statement that would have matched up with my pocket book and everything else which I don’t have access to now.

Judge: Help me with this because it may be said at the end of this case, well Goodness! if there’s ever an incident even in busy Ely which you would recall it’s one which involves the daughter of a police inspector and one for that matter where a somewhat unusual charge was placed, so it may be said if you’d ever remember something, you’d remember this one.

Roe: You tend to recollect highlights not lowlights, uhh I… it’s a very unusual charge. I must admit I don’t recollect it. I can only go on my recollection at the time and I just didn’t recollect it at all but I’m not disputing that I went over to Fairw, uhh Barry Police Station and ….

Judge: You also told me, and today, about the process and once you have the file what you do with it and you said “I sent the file in and the report goes to them, it’s for my superiors, it’s they who would send to the Local Authority or the CPS”

Roe: It looks rather different. I think it’s a bit of possibly police terminology because everything is submitted through the chain of command and if whoever is in charge of that area makes the decision if it is forwarded on. I forwarded on to the Local Authority but the Superintendent may so no, we’re not doing this, or I think this should go in this direction instead. It’s his decision that carries the weight at the end of the day and all decisions of this nature and most others and it’s just the terminology “I submitted the report to the Local Authority” but it would have been through the normal chain of command.

Judge: Yes. Also we know that a charge was prepared and made in respect of the protection against conviction and you’ve already been asked the question as to [it being (?)] pretty much out of the ordinary, you told me, absolutely out of the ordinary

Judge: And, you told me that Mr Kirk was interviewed, because we’ve established it was at Barry Police Station and on the date of the interview 3rd July 1995 that that charge is put. And, when you were asked about that on the last occasion when you gave evidence before me, I think you may remember, Mr Kirk said “Did it surprise you that I was arrested for that?” and your answer was “You wouldn’t have been. As soon as it hit the custody officer he would have said that is not an arrest able offence and it’s a matter for the Local Authority”.

Judge: Whereas it did go to interview and charge, which was out of the ordinary for you. Now I have to look forward to what may be said on either side at the end of the case about this, and it may be said, it is really rather difficult to make a mistake like that, if something so out of the usual was pursued in respect of this absolutely by way of a charge. Can you tell me more?

Roe: Yeah, the charge that we were more concerned with was the allegation of criminal damage and uh well originally theft, but uh, that wasn’t to be held at all, the theft, the criminal damage was uh if uh, was the charge that was put. The other charges were ones the Local Authority must have recommended and there must have been some other because that’s a most unusual charge that he didn’t tell us. Now unfortunately the answers may have lay in the tapes of the interview of why that was there to answer the missing question of who is the owner of the property. Um, there are, it is unusual but uh, I must say I couldn’t remember it at all.

Judge: Yes and I think I’ll ask my own questions to you. You’ve been reminded very recently indeed that in your Statement to Dolmans which you checked and signed as being the correct record of your evidence, you said very clearly “I have no recollection of arresting Mr Kirk in relation to this incident it would be most unlikely. I believe that it is unlikely that Mr Kirk was arrested in relation to this incident” and of course we know that he was.

Judge: The arrangements were made to go over from your own station to Barry, that you interviewed him in connection with, what looks like PC Roche, in respect of, we’ve touched on this before, criminal damage which may have been a pretty straight forward matter and ending up with the charge which was the most unusual matter

Judge: And so the question is how can you forget that?

Roe: Well how the mind works I don’t know Sir. All I can say is I can’t recollect these charges and the subsequent events from this case because basically, it’s not like an accident where you see drama enacting in a really serious way in front of you and it sticks in the mind. This was a thing which sort of ploughed its way on and uh, it uh, there was nothing untowardly dramatic about it, and it just didn’t stick in my mind after a while.

Roe: I, I can’t give any other reason

It was of no surprise to the Claimant, during the 2013 civil hearing, that those that had lied the most had been promoted to Inspector or more and reminding him that promotion to that level of rank in the South Wales Police Service usually required membership of their area secret society that includes devil worship.

The list is to be continued on or before ‘fresh evidence’ is induced at 15th April 2016 12.30 am Cardiff Civil Justice Centre estimated three hour hearing.