The fabricated 2009 ‘Trading in Machine Guns’ allegations, resulting in the Appellant being registered as a South Wales Police MAPPA level 3 category 3 victim, to be nearly shot and when not, having him sectioned under the 1983 Mental Health Act for incarceration into Ashworth high security psychiatric hospital, for an indefinite period, could only have been with the apparent  co-operation from some Cardiff Crown Court, Magistrates judges and Cardiff Crown prosecutors.

Incarceration, for possible life without any trial, was only prevented  by the quick thinking lawyer, ex Vale of Glamorgan MP, Walter Sweeney and his wife, Nuala, consultant Radiologist, by obtaining a counter medical report, from England, castigating the conduct of XX who appears now to be banished from NHW (Wales) to reside in Christchurch in New Zealand.

August 23, 2012 12:46 AM ——————————————————————————– ————————— 7} nWhite Ferret said: It is said that the Doctor who gave unlawful information in order to have Maurice Kirk convicted as well as his wife are on sick because of MJK harassment. If this is true, then someone has to be taking the Michael. This presumably means that they would both be paid sick leave from the public purse by the NHS. So, this raises a number of questions. 1. Does this mean that they are also too ill, or unfit to work at their other private clinics. 2. If this is the case, could it not be argued that they are taking money presumably from the public purse under false pretences. 3. Where do they have their main income from NHS Wales or their Private Clinics. 4. With NHS Wales having an in depth knowledge of this case; and having their own people sitting in the public galleries during Maurice Kirk’s cases, would it not be appropriate to suspend this Doctor and his wife with immediate effect. 5. An NHS Wales Doctor has proved another NHS Wales Doctor wrong. Surely, the honourable duty of the public funded NHS Wales is to investigate. 6. How many other cases has this doctor got wrong. 7. Naturally there are Royal Charters immunities to prosecutions, however, it is a matter of public interest and confidence to investigate fit and proper use of public monies in this instance, and protect the integrity and trust of those that may be tarnished by any disrepute that may have been brought upon NHS Wales by this Doctor. 7. Should this Doctor have brought the Caswell Clinic and NHS Wales into disrepute, then NHS Wales has a duty to act accordingly.

A fat lot of importance that is to this Appellant, of course, as until XX’ fabricated medical reports, such as the extract below, are corrected or expunged from the record both his Civil Aviation Authority’s pilots licences and attempts to be re-registered with the Royal College of Veterinary Surgeons are doomed.

The South Wales Police were ultimately responsible, once again, for first instigating FTAC’s, unfortunately for them, clean bill of health after Maurice had visited Highgrove to deliver a letter to HRH Prince of Wales with a stark warning of the quite unchecked corruption that seems to be within the heart of in the South Wales judiciary.

XX’ August 2009 psychiatric report, destined for his 2nd December 2009 Ashworth application, before HHJ Neil Bidder QC, was very cleverly written by arranging not to examine his victim himself but basing it only on the fictitious 8th June 2009 MAPPA data, much of which he disapproved as written by senior police officers and a couple of student nurses that just happened to visit his Cardiff prison cell, at the time, for a chat.

A string of Cardiff judges, ever since, have had to fight off the Appellant with his numerous applications to obtain those fabricated medical records in order to  expose the conduct of the South Wales Police hell bent on prejudicing the prosecution of the long running civil claim of their unfortunate victim.

The Chief Constable, Peter Vaughan, has  used these medical records to successfully oppose the Appellant’s bail applications to incarcerate for almost three years of his life when either falsely accused by the South Wales Police or having never been convicted.

EXTRACT from XX’ Sept 09 psychiatric report when not even qualified to examine his wrongly ordered Aug 09 SPECT brain scans by way of i/v radio isotopes.

These hidden reports were given, by the Welsh police, to the Tottenham London police while tied up in knots over their unlawful snatching of the six Nigerian Musa children, in 2010, before the parents were deported without them.

Met police were asked by South Wales Police to arrest Maurice and have him sectioned, indefinitely, again, anything to slow down the ongoing civil damages claim against them and their ill earned pensions.

All charges, in two  separate Metropolitan Police incidents, were  later withdrawn and the Appellant was released from the Harringay Corner Magistrates cells.

The 3rd incident, over the Musa family, was heard in a London court with the South Wales Police having refused his release from HM Cardiff prison as considered too dangerous.

Successive Welsh judges, ever since, have now appeared to have conspired with their police force to prevent the Appellant from properly preparing his on going civil claims, requiring well over two hundred witnesses and was even a matter raised in The Royal Courts of Justice in February 2016, by Lord Justice Burnett QC, in his attempt to be allowed his own written records, from now on, whilst defending himself in any welsh court

The Appellant has been reluctantly slow at coming to terms with ‘just what really goes on in our law courts’, now a days, as he had just left ten years of living within the corruption in the  British tax haven called Guernsey where they boast its allegiance was not the UK’s Parliament but only to Her Majesty The Queen.

Guernsey’s incestuous Mafia had relied on two UK veterinary surgeons, in amicable partnership, trusting their respective island lawyers to put a stop to outside attempts to disrupt their business. However, their respective insular lawyers, UK layers have no right of audience, Messrs ACK Day and Peter Ferbrache had other ideas with their sole intention in aiding in the stealing their client’s veterinary practice and freehold from right under their own feet.

But the veterinary practice and all the Appellant’s personalty, with his father’s veterinary equipment, was stolen and sold off at a fraction of true value to someone, let us say, chosen to be more ‘malleable’ to the island’s customs rather  than to anyone else so foolish to have stepped off the boat in the first place.

The purchaser, A Mr McCrae, took the joint lawyer’s advise, before purchase, to obtain the owner of the freehold’ signature, a Nicholas Blackwell BVSc MRCVS Esq, to sign a disclaimer accepting full responsibility of the sale in case his partner found about the fraudulently drawn up deal. This was only achieved whilst Mr Blackwell was mentally impaired by needing psychiatric assistance.

This was quite unbeknown to his partner, of course, with his first right to the purchase of the practice in the event of the other’s demise or retirement.

But this Appellant found out within the statutory period and raised the Clamour de Haro.

The police, of course, had agreed before the illicit sale not to step in once the fraud was uncovered as it was lawyers that had concocted the fraud it in the first place!

For further information on how the ‘Clamour de Haro’ prohibitive injunction was abused, to protect lawyers, see: http://www.kirkflyingvet.com/guernsey.

The South Wales Police, having now failed in all the above, has caused successive Chief Constables to continue in conspiring with the local law courts to have the Appellant locked away on the slightest  fabricated piece of nonsense they could muster and had quietly agreed upon with HM Crown Prosecution Service (Wales) to be prepared to turn the proverbial blind eye to.

So, in 2010, following the Appellant’s acquittal in the ‘machine-gun’ trial, where the police had painted the antique a different colour in the hope of fooling the jury, His Honour Judge Hughes [1], on St David’s Day 2012, erred in judgment, it is humbly submitted, over basic principles of British law.

It had been agreed by Cardiff’s cabal to cover up their failed attempts in getting their victim locked up for even longer as the alleged ‘harassment’ of XX and ‘breaches’ of the never served ‘ restraining order’ was all invalid from the very start.

As was so recently discussed by HHJ Rolands and a Cardiff CPS barrister, in another one of their clandestine court hearings, their victim was deprived of the full d]facts other than it had been decided the serving of a restraining order was, in itself , an unlawful act as the police had tampered with the original evidence once the hearing unfolded the wrong way.

Note in the transcript below:

Page E6       Appellant being refused the right to cross examine the police or their police doctor.

Page 7D      Appellant being refused his legal papers in court, another recurring theme.

For the Appellant to be refused the plethora of papers generated in 1st Dec 2011 magistrate’s hearing, by the then clerk of the court Mr Michael Williams, was in order to orchestrate a harassment conviction in the first place.

Despite the conduct of the original police ‘investigating’, in cahoots with the now sacked HM Prosecutor, David Gareth Evans, to change the original fabricated evidence, only carrying a non custodial sentence, they have now confiscated those prosecution exhibits to ensure the 4th Jury cannot see them either.

Judge Hughes is recorded, on tape, misleading the Appellant which only reminds us that any UK judge, if he or she is so minded, may kill, rape or even lie in a welsh court, as he or she has HM immunity to prosecution for apparant‘ institutional corruption’ each time their respective positions of privilege, in HM Partnership, is in any way challenged.

The Criminal Cases Review Commission (CCRC) is yet another case in point and another British anomaly, like a Judicial Review, controlled and driven by any politics of the hour.

This Judge Hughes is only first of the five or so  Cardiff judges’ routine conduct to be published for the proverbial unsuspecting UK tax payers. Over the next few weeks Maurice will be attempt to publish the facts on other judges to show this behaviour is tolerated by the HM Justice Ministry once known as HM Home Office.

The 2nd  judge to consider, over XX, must be Nicholas Cooke QC or Llewellyn-Jones QC, as both of whom,  in the Spring of 2009, were fully aware of the South Wales Police’s MAPPA plot  to having the Appellant conveniently shot if  playing their plan B, the  ‘Gulag’ card, should also fail with their fragile machine-gun nonsense.

On or about 7th August 2009 this judge had admitted receiving a fax, that morning, purported to have come from XX of Caswell Clinic who just happened to be Barbara Wilding’s Chief forensic psychiatrist for Wales.

The Appellant  had been  wheeled in from Cardiff prison, protesting whilst on remand, over an antique WW1 machine-gun conspiracysuch as these of institutional corruptions tend to dream up.

Maurice was NOT a patient nor ever has been but only because he refused to consume, later that day, the Caswell Clinic food and only drank tap water. 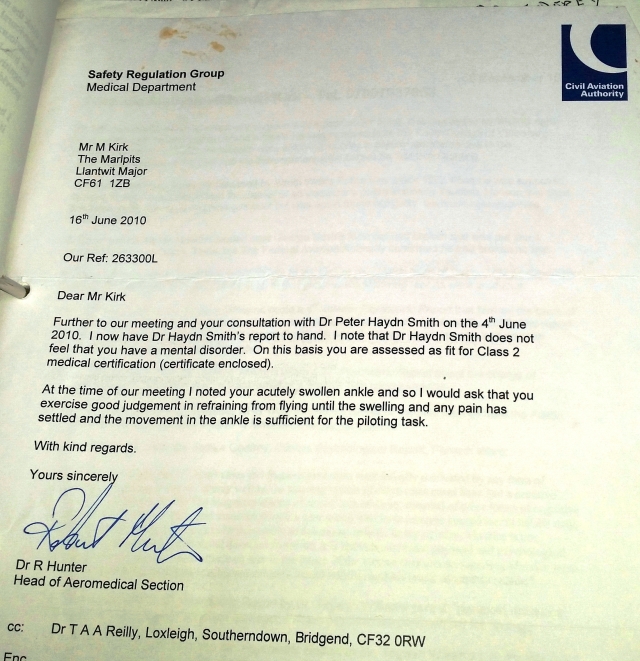