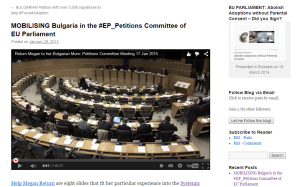 I am re-fuelled from visiting Brussels on Tuesday for a meeting of the Petitions Committee where Ellie Popova presented her case: Help Megan Return to her Bulgarian Mum. I reported as MOBILISING Bulgaria in the #EP_Petitions Committee in EU Parliament.

As is to be expected, MEPs are appalled to hear what is going on in secret family courts in the UK. BUT:

Given the pace at which EU institutions work, it doesn’t seem to be worth filling in an online petition for Maurice. But his Parole Hearing scheduled for 4 February has now been cancelled without reason:

I have been informed that the parole hearing for Mr Kirk on the date given has been cancelled.  Parole hearings do not fall into the responsibilities of Domestic and Legal Visits booking so I am unable to give you any further information on the matter.

If you have any queries you will need to write into HMP Swansea.

So it looks as if he’ll be 70 behind bars on 12 March! Courtesy of South Wales Police and all related key people in key positions: in prisons and courts.