LITIGANT in Person, in wheelchair imprisoned with trumped up charges #SouthWalesPolice 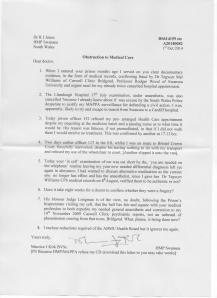 The Flying Vet Maurice Kirk should be celebrated for his activities as pilot and veterinary surgeon. But South Wales Police have been after him for some 20 years and managed to get his licence revoked, besides keeping him fraudulently in prison for a total of some 4 years.

This time he’s been in HMP Cardiff and HMP Swansea since 14 October 2013 and South Wales Police want to keep him until March 2015.

BUT now that Maurice had the luck of a Prison Inspectorate three day visit to Swansea, he has found his condition slightly eased to include:

It is hoped his telephone numbers can expand from one (his sister) to several.

And now his story in his own terms – in chronological order:

and on his own site: http://kirkflyingvet.com/blogs/news/archive/2014/09/24/maurice-s-sister-on-dialect-radio-with-tony-gosling-a-great-account-of-a-great-cover-up-by-south-wales-police.aspx

7 Responses to LITIGANT in Person, in wheelchair imprisoned with trumped up charges #SouthWalesPolice